Welcome Back, Potter: The Flying and Magic Epic “Harry Potter and the Deathly Hallows Part 1” Isn’t Half Bad (But It’s Still Just Half) 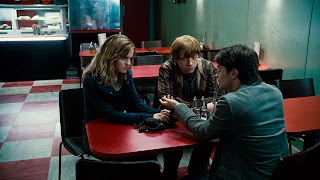 The latest Harry Potter film is not a good movie. It’s a good half of a movie. You have to wait until July of next year to see the second half. Sure it’s a movie that’s split right down the center, but this two and a half our opus is certain to give even the slightest Harry Potter fan a preemptive dose of dweeby excitement. I don’t consider myself a Harry Potter fan and even I enjoyed myself. And even thought this movie is still really only half a bigger overall film, it stands up pretty well. It does have a beginning, middle and an end. Although that ending is rather abrupt and I didn’t really notice a climax anywhere since it seems like the entire second part will be the climax. Only time will tell.

Having said all that I certainly had to study up in order to understand even three quarters of what was going on in “Harry Potter and the Deathly Hallows Part 1.” I’m probably the only human on the planet who has seen all the films but who hasn’t read the immensely popular (is popular even a strong enough word?) series of fantasy books by J.K. Rowling. And I’m ok with that. Sure I said I’ve seen the films, but that doesn’t mean I really understand what’s going on in them. I spend plenty of time studying the plots of 1-6 before climbing about the Hogwarts Express for Part 7. I reviewed terms like Horcrux (an inanimate object used by one Lord Voldemort to attain immorality, did I pass?). I’ve known what a Muggle is for quite some time, although I’m still not quite sure what exactly the Deathly Hallows are. Oh dear lord, how do kids get into this stuff anyways?

What is there really to say about this Harry Potter flick anyways? If you’re a fan you’re going to see it and judge it based on whether it’s faithful to the book or not. Is it? I don’t really know, but since they split the book into two separate films, I imagine they have plenty of room to keep the important stuff in. What if you’re not a fan? If you’ve never seen a Harry Potter film I doubt you’re going to want to start with Part 7. I’m still not quite sure if these films have much mass appeal outside of the flying and magic fan base, but it does showcase the standard adventure storytelling such as good verses evil. There is action if you like that, there is made-up fantasy stuff if you like that, there is some romance if that’s your thing.

The film is directed by David Yates who has directed parts 5 and 6 and his style seems to fit in nicely with the style the previous directors. The look and feel of all the films doesn’t feel all that different to me, or all the special to be frank, although I do like some of his directorial flourishes such as that hyperkinetic camerawork when the Snatchers are after Harry and his friends in the woods. A similar technique was seen in the opening of “Order of the Phoenix” when Harry and Dudley and are running away from the Dementors. For a second you might think you’re watching a Ridley Scott film.

I won’t even attempt to describe the plot of this movie, although I did understand it for the most part, for fear of humiliating myself (or sounded like a 6 year old). Besides you know what happens; unlike me, you’ve probably read the book! Those who complain about the plot being “Harry Potter goes camping in the woods” are seriously mistaken because the film has plenty of action and is rarely boring and that’s coming from someone who usually finds movies like this boring. All the actors do a great job in their respective roles as they’ve always done since the beginning.

This “Harry Potter” features all the elements of a watchable film. The effects are good, I loved the music score by Alexandre Desplat, it has some nice warm humor, and the film has high production values all around. And even if I’m not the biggest fan in the world, “Deathly Hallows Part 1” didn’t cause me pain and actually makes me excited for the concluding chapter. It’s the rare flying and magic movie that works. Call it a miracle if you want. GRADE: B

Hello there, I discovered your blog by way of Google whilst looking for a similar matter, your web
site got here up, it seems great. I have bookmarked it in my google bookmarks.

Hello there, simply become alert to your blog via Google, and found that it
is truly informative. I am going to be careful for brussels.

I will appreciate in case you proceed this in future.

Numerous people will likely be benefited out of your writing.
Cheers!

Have a look at my web blog Inverter Fuji