Bore of the Worlds: “Skyline” Succeeds in Creating the Most Snooze-Inducing Alien Invasion in Cinematic History 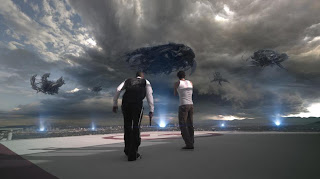 If anything, "Skyline" is just a missed opportunity. It was an chance to create a story of an alien invasion from the sole point-of-view of regular people like you and me with the use of a low budget yet with cool special effects. But we already have similar movies like “War of the Worlds” (told from the point of view of average people) and “District 9” (low budgeted but with cool special effects). Hey at least the movie’s trailer was awesome. Even if the movie wasn’t just a conglomeration of other alien invasion movies, it could have at least been interesting or decently entertaining. Two things the film is sorely lacking.

“Skyline” tells the story of “normal” people. I’m hesitant to use the word normal because it implies they are normal the way you and I are normal and yet I know you and I are not this stupid. If you don’t like characters who do the wrong things are precisely the wrong time then steer clear of this movie. Let’s forget for a minute that this movie has a shoestring plot with forgettable characters. (A couple attends another friend’s birthday party in LA. They’re staying in a swanky high-rise. We find out the girl is pregnant. Cue alien attack) Most people will go see a movie with aliens because hello there are aliens in the movie! The aliens here are almost cool looking except that still look like they’re still in the process of actually being completely rendered by the visual effects people. They’re not SyFy Original bad, but decent enough. Ok find, I’m willing to throw this lame movie a bone. And I liked how the giant aliens spit out sticky tentacles, but again not enough to salvage the movie.

Yeah there are human characters here, but like mentioned before they’re pretty forgettable. The film’s biggest stars include Eric Balfour who was on “Six Feet Under” and in “The Texas Chainsaw Massacre” remake. His best friend is Donald Faison, who you may know from either TV’s “Scrubs” or as Murray from “Clueless.” These two guys aren’t bad actors by any stretch of the imagination, but they don’t give particularly amazing performances. The ladies on the other hand fare much worse. Balfour’s girlfriend played by Scottie Thompson is just sort of whiny although she’s not as bad as Brittany Daniel, who I’m not sure why is even a paid actress. She has slummed it up in movies like “Little Man” and “White Chicks” where she always plays a Paris Hilton-like bimbo. And poor Batista from “Dexter” is equally horrendous here. Although most of the blame should be put on the writers for making him utter pretty atrocious lines.

Of course, let’s focus the blame on those who deserve it and that would be “the Brothers Strause” who are special effects guys who try to make movies. They’re last effort “Aliens vs. Predator: Requiem” was met with a collect meh from fanboys alike and here they don’t do much better. Colin and Greg should stick with their visual effects jobs and leave the directing work to… directors. I admire their attempt to tell this story from the point-of-view of average Joes and having the film’ story confined to one real location, but in order to do that you must give us characters to root for and keep things constantly moving forward. Things have to be kept interesting or else you’ll lose the viewer. The characters mostly stay inside their penthouse suite mostly because you can tell the screenwriters didn’t know what else to do. Yes I’m looking at you Joshua Cordes and Liam O'Donnell. There is such a horrible sense of pacing to the whole thing too I began checking for the time half way though. I won’t even mention the laughable moments in the film’s concluding minutes or any of the other many laughable moments for that matter.

“Skyline” is the type of movie that as you watch it you actually think to yourself, wow, I really wish I could be watching a Michael Bay movie instead. Admittedly there are some cool concepts here (I sort of liked the parking garage sequence) and seeing a bunch of human bodies being sucked up all at once into a giant spaceship is a pretty horrifying thing to see. So is the movie. GRADE: D

Just as they are typically produced within a controlled shop environment,
under meticulous welding and fabrication standards.
CavesSnow caves are similar tto quinzees except they are often iphone ''nonredundant.
Microtubule have nonlinear iphone properties, are
electric polar and is damped by surrounding medium, strongly damped if ordering of water is disturbed.


Thank you for joining us. his article is very helpful