V For Villain: “Megmind” is an Outrageously Fun Take on Superhero Clichés 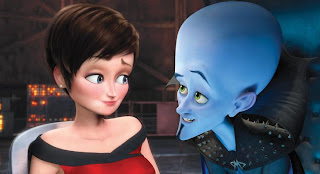 This is the animated superhero film I’ve been waiting for. Some will say “Megamind,” a funny new animated comedy from the DreamWorks gang, is not much more than a retread of Pixar’s “The Incredibles.” Whether that’s true or not is debatable, what’s not debatable for me is that Megamind is leaps and bounds more entertaining than that Pixar film (Relax! It’s the only one I feel lukewarm about). And if Megamind proves anything, it’s that the villain 9 times out of 10 is more interesting than the good guy. Megamind revolves around the villainous Megamind (Will Ferrell) and what happens when he actually ends up defeating the good guy the heroic Metro Man (Brad Pitt). You see a supervillain is nothing with a superhero.

The film begins by introducing us to how Megamind and Metro Man came to Earth. They came as infants, “Superman” style of course! Metro Man landed in nice neighborhood where a nice couple took him in where his superpowers were harnessed for good. Megamind, however, landed in a prison yard, and was instructed by the inmates on the ins and outs of being bad. These two grew up together in Metro City (or “Me-troc-ity” according to Megamind) and the general public is infatuated with Metroman and they obviously hate Megamind, who is able to escape from prison with the help of a wristwatch that can disguise him as anyone he wants ala Mystique from “X-Men.” With the help of his evil minion called Minion, a fishy alien head with an android body (voiced by David Cross), he returns to Metro City with the intent of kidnapping roving reporter Roxanne (Tina Fey) to use as a hostage to trap Metro Man. In so doing, he actually ends up killing his archnemesis! Now he can take over Metro City, which he does, to the tune of Bad to the Bone.

Of course being a supervillain is no fun with out the superhero, so he decides to create one. He accidentally zaps Roxanne’s goofy camera guy (Jonah Hill) and he becomes “Tighten” (the only name he could get the rights to). But nothing is always as it seems in Metro City and sometimes your expectations about who is really a villain and who is really a hero will be a little off. Which is why this movie works so well. There are plenty of original twists and turns, even if it doesn’t necessarily add anything overall new to the genre. It features a terrific screenplay (by first time writers Brent Simons and Alan Schoolcraft) and top notch voice work by its cast. The animation is great which really helps and the film is actually worth paying the extra bucks for 3D. The film is funny and witty, will great pop culture references, that won’t make you roll your eyes, but will have you laughing. Megamind is actually one of the more memorable cartoon characters as of late.

“Megamind” is a great movie. If you love animation or comedies or adventure or superhero flicks, this movie will be more than satisfactory. It’s a highly entertaining and original take on a genre that beginning to get a little worn out. Sure maybe it doesn’t have the prestige of Pixar but it’s definitely one of the best animated movies of the year. GRADE: A-

Hi there, You've done a fantastic job. I'll definitely digg it and personally recommend
to my friends. I am confident they'll be benefited from this web site.


Have a look at my blog; garcinia cambogia extract