The Brother, Sister: “Conviction” is an Arresting True Life Drama 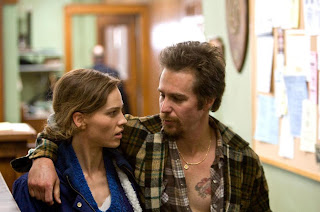 One of the main things that the terrific film “Conviction” has going for it is it’s a wonderful story about the bond between a brother and a sister. Not in quite a while have I seen such a touching relationship portrayed in a movie. Betty Anne and Kenny are the type of siblings who really depend on each other. They had a rough childhood. Their father died when they were young and they had a mother who was nearly absent just as much. They were sent from foster family to foster family but were never able to break their special bond, even whenever Kenny would egg on the two of them to do something wrong (like sneaking into a person’s home and pretending they had an actual happy life). Kenny’s borderline repellent behavior wasn’t enough to stop Betty Anne from standing by her brother even when he was accused of murdering a local woman. While he was at first cleared of charges, a person especially close to Kenny would later be responsible for him actually being tried and convicted for a crime he never even committed. And the story of “Conviction,” which is based on actual events, is especially intriguing because it dares to let us care about a person who if in different circumstances, we might as just as well assume the man was guilty.

Kenny Waters, played here by the wonderful Sam Rockwell, whom I especially loved in the underrated “Matchstick Men,” is a person that is difficult to like. And that’s why Tony Goldwyn’s direction and Pamela Gray’s script are so great, because they get us to care about someone who’s really difficult to care about. Kenny has anger management issues, he gets in fights, sometimes he’s just unpleasant. His sister Betty Anne Waters (Hilary Swank in full Erin Brockovich mode) doesn’t care about his personal issues. When he’s finally sentenced to life in prison for a murder she honestly believes he didn’t - and more importantly wouldn’t commit – she makes it her life mission to get him out of jail. And she does so by first getting her college degree and eventually getting into law school. She’s willing to put her life on hold and even disrupting her marriage to a guy even more unlikable than Kenny. She’s willing to become a lawyer just to help her own brother. How many of us would do that for a sibling?

The outcome of the film’s story isn’t what’s important here, it’s the events leading up to it that counts. And that includes plenty of stumbles and road blocks along the way. Luckily Betty Anne befriends another older woman in her class named Abra (Minnie Driver), mostly because they’re “the only ones in class who’ve gone through puberty.” Abra also makes it her mission to help Betty Anne because like her she’s a strong woman who’s willing to help out a friend who’s in a desperate situation. At first I wondered, once betty Anne becomes a lawyer, what is she really going to be able to do to help her brother get out of jail. I mean, not to be Debbie Downer, but he’s already been convicted. What is she really going to do? Of course there’s a lot more to this story than you or I even knew about. I’m hesitant to use the word “conspiracy” but there’s a lot going on and it’s fascinating to see how much is really going on…and as one character once said in Minority Report: “dig up the past and all you get is dirty.” Well Betty Anne is about to be covered.

The film does have a happy ending and it’s sort of remarkable how you really related to this woman and her struggles. Sure on the surface this all seems like made-for-TV melodrama, but it’s not melodramatic. Sure there’s nothing especially fascinating in how the film is shot, but that’s to be expected in a character based drama. And the film is wonderfully littered with great although brief supporting turns from people like Melissa Leo as a dirty cop, Peter Gallagher reprising his “OC” role as a lovable lawyer, and Juliet Lewis who is great a trashy key witness.

Let’s face it, “Conviction” doesn’t have the emotional punch or flashy goodness of “Erin Brockovich,” but it offers much more substance than “The Blind Side.” It tells a fascinating story in an entertaining and easily digestible way. It features excellent performances from a completely reliable cast and tells a beautiful account about a brother and his sister who refuses to give up hope. Whether Swank gets a nomination or not (does Bening have to watch out again??) it doesn’t matter; what matters is that “Conviction” is a movie worth anyone’s time and money. GRADE: A-

Admiring the time and effort you put into your site and in depth information you provide.
It's awesome to come across a blog every once in a while that
isn't the same out of date rehashed information. Fantastic read!
I've bookmarked your site and I'm including your RSS feeds
to my Google account.

The article is very useful. Thanks for sharing. Also read our article about health and treatment information, I'm sure useful :)

can you want to remove your account SO READ THIS ARTICLE IT,S HELP you alot
Delete Snapchat Account