Oh, Stewardess! I Speak Jive: An Ode to "Airplane!" 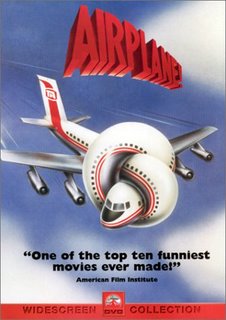 Airplane! is my favorite movie of all time and definitely the funniest.

Surely, you can’t be serious?

I am serious, and don’t call me Shirley.

From the bravado Jaws homage opening to the moment blowup automatic pilot Otto flies his 747 majestically back into the air with his new blowup girlfriend, the film Airplane! is a laugh riot from start to finish. In fact, the film is funny even after it’s over! (Catch those crazy credits and that poor taxi passenger) Airplane! lifts full lines of dialogue (For instance, "Flying a plane is no different than riding a bicycle.") from a little known disaster film from the 1950s called "Zero Hour!" which is almost as funny as "Airplane!" Writing-directing team ZAZ (David Zucker, Jim Abrahams & Jerry Zucker) turned what was supposed to be a serious film about food poisoning striking the passengers and crew of a jetliner into a hilarious spoof hell-bent on squeezing in gut-wrenching laughs nearly ever other second. Sight gags after sight gags abound, including shit literally hitting a fan, a watermelon falling from the sky, and Robert Stack removing two pairs of sunglasses for emphasis.

Some seriously funny actors headline the cast, mainly Leslie Nielsen in his first spoof movie role. Nielsen, as Dr. Rumack, (we know he's a doctor because he wears his stethoscope as if it were a necktie) delivers completely straight, deadpan lines such as this exchange with a stewardess:

“You'd better tell the Captain we've got to land as soon as we can. This woman has to be gotten to a hospital.”

“It's a big building with patients, but that's not important right now.”

This is why the film works so well. The actors say completely hysterical things without cracking a smile, which makes the audience laugh twice as hard. You think, did they really say that? And who knew the Beav's mom could speak jive?

What about our fearless Captain Clarence Oveur (Peter Graves) who succumbs to food poisoning like most of the plane’s passengers because he had fish and not steak for dinner? (Thank God Dr. Rumack had lasagna!) He spends his time chatting with a little boy passenger who is excited to take a tour of the cockpit and bother the co-pilot, Kareem Abdul Jabar. (Inspired casting right?) Graves delivers some of the film’s funniest and most popularly quoted lines directed at the innocent young boy such as “Joey, do you like movies about gladiators?” and “Ever seen a grown man naked?” You can't get away with that stuff today.

So the crew all eat fish and therefore the only man to save the day is war veteran pilot Ted Striker (Robert Hays) who flew fighter planes, but this plane has four engines. It’s an entirely different kind of flying, altogether. "It’s an entirely different kind of flying." Ted has a drinking problem, not involving alcohol, but rather his uncontrolled tick of throwing his drink into his face. Ted also hasn’t been able to get over his love of Elaine (Julie Hagerty) who is a stewardess on this ill-fated flight. Ted and Elaine used to be in love and so happy and used to frolic on the beach with catfish and seaweed ala "From Here to Eternity." Can Ted get over his hang-ups, land the plane, and save the day? The plot seems out of a really bad movie doesn’t it? Well it is, remember I mentioned "Zero Hour!?" It even has flashbacks which lead to an uproarious send-up of "Saturday Night Fever." The inane "Airport" series gets its due too. Every airplane disaster cliché is accounted for. Reluctant hero who must save the day? Check. Newspapers headlining the flight’s impending doom? Check. Heart transplant child patient? Check. Pesky religious zealots? Check. Out of control passengers who must be slapped and then eventually whipped and beaten? Check.

Even if the film isn't all that polished (you can clearly see the tape holding the set together in some shots), with this film the ZAZ team triple handedly invented the zany spoof comedy subgenre. Though many people agree it started with Mel Brooks. While Brooks’ films, such as the great "Young Frankenstein," did precede "Airplane!" on the cinematic timeline, you would be doing yourself a favor to check out this brilliant satire if you haven’t already (Even it's underrated ZAZ-less sequel isn't terrible, as is ZAZ's follow-up "Top Secret!"). In fact, "Airplane!" is funnier than any of Brooks’ films, and I’m a huge Mel Brooks fan.

Surely I must be joking.

I’m not joking… and stop calling me Shirley. GRADE: A+
Posted by Chris at 9:30 PM

The rado replica behind this tactic is that the much higher mark up on precious metal cases help cover the very high costs of both the replica watches and the manufacturing of said new movements or features. Time and again we see brands painstakingly develop complicated movements or other features which they will only make available in precious metal cased replica watches sale even if other models of the same brand do come in steel. Go so far as to say the source of the issue is in the pigments used to color it as pigments don take the heat required to produce ceramic quite well and often form faulty areas in the surface. One of the most versatile, elegant and sporty rolex replica sale to one of the most boring and sedative timekeepers. The Daytona provides one unquestionably iconic aesthetic and beholding a piece of that can feel both rewarding and infirmative. Here my issue with fake rolex sale most iconic designs that you see gazillions around you are only appreciated by die hard fans and enthusiasts if said designs have fascinating details and numerous variables.